Uncertain markets are set to become even more volatile due to increasing macro uncertainty, and many companies are putting their IPO plans on hold. However, our survey reveals that there is some longer-term optimism

The reasons for the decline have been well documented – a slowing of Chinese economic growth; muted US economic performance; poor aftermarket performance of some IPOs; and uncertainty surrounding the outcomes of both the 2016 US election and the consequences of the UK’s EU referendum, where the leave result has only succeeded in ratcheting up volatility.

Overlaying these factors, the forecasts of global economic growth for 2016 have been revised downwards as the year has progressed: the International Monetary Fund, for example, downgraded its global growth estimate for the year by 0.2% in April 2016, from 3.4% forecast in January 2016, a growth rate it described as ‘modest’.

In today’s markets globally, there is an international domino effect. What happens in US markets, or decisions about the US Federal Reserve rates, for example, affects sentiment and ultimately what happens in Asia.

While volatility in IPO markets is clearly a major consideration for many companies anticipating a new listing over the coming 12 to 24 months, our survey shows that companies globally are optimistic about the future direction of activity.

The majority of respondents (58%) foresee a return to volumes seen in the past few years within the next 12 months, with 38% suggesting this will happen in the next 24 months (see figure 1.2). Just 2% believe a recovery is further out. While these interviews were carried out before the UK referendum, respondents will have factored in, at least to some degree, the possibility of Britain leaving the EU. 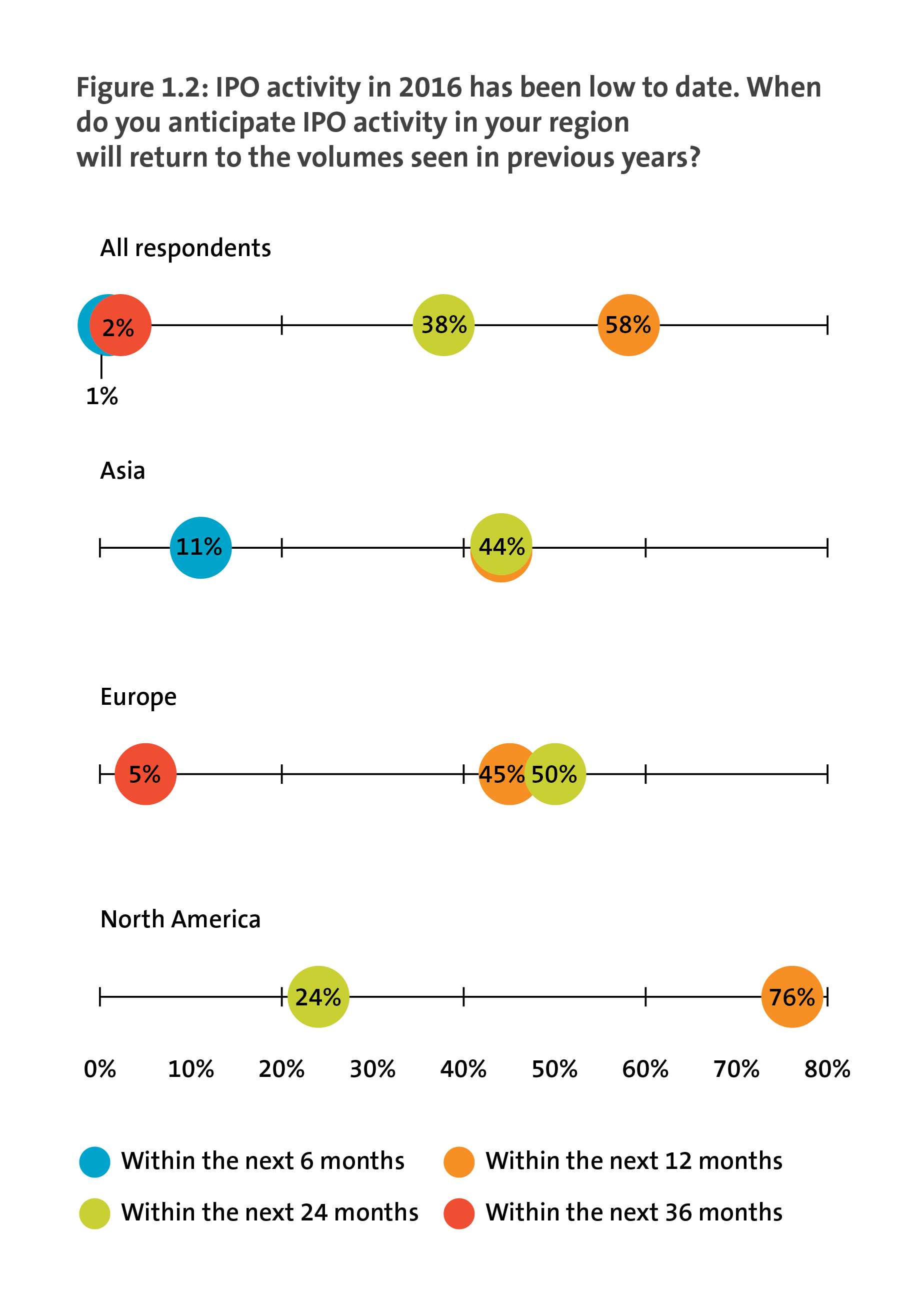 Concerns around China’s economic growth and commodity price volatility have eased a little and the US economy is looking reasonably stable, so there has been growing cause for optimism around IPO activity. However, the uncertainty caused by the outcome of the EU referendum may delay the anticipated improvement in IPO activity on the UK markets.

The responses differ by geographic region. Among those in Asia, 11% of the companies we surveyed believe that IPO markets will recover within six months, while no European or North American respondents anticipate such a rapid rebound. This may reflect the optimism felt in some of Asia’s growth markets, where more favourable economic conditions underpin forecasts from the IMF of GDP growth in the Asia-Pacific region of 5.3% for 2016. And signs that this is filtering through to public markets are already there — Line Corp, the Japanese subsidiary of South Korean internet company Naver, for example, raised over US$1.1bn with a dual listing on the New York and Tokyo Stock Exchanges.

There is no shortage of desire on the part of companies in Asia to undertake an IPO. Some companies may not be quite at the right stage, but there are still a lot of investable prospects.

Respondents in North America are overall the most optimistic of the three regions, with 76% believing a return to previous years’ IPO levels within 12 months is possible, compared with 45% in Europe and 44% in Asia. Only 24% of North American respondents think that a recovery would take up to 24 months, and none say it would be as long as 36 months.

A change of heart

While 64% say that recent volatility in global capital markets has made them reconsider whether an IPO was the right strategy, over a third (36%) admit they have not reconsidered going public at all (see figure 1.3). 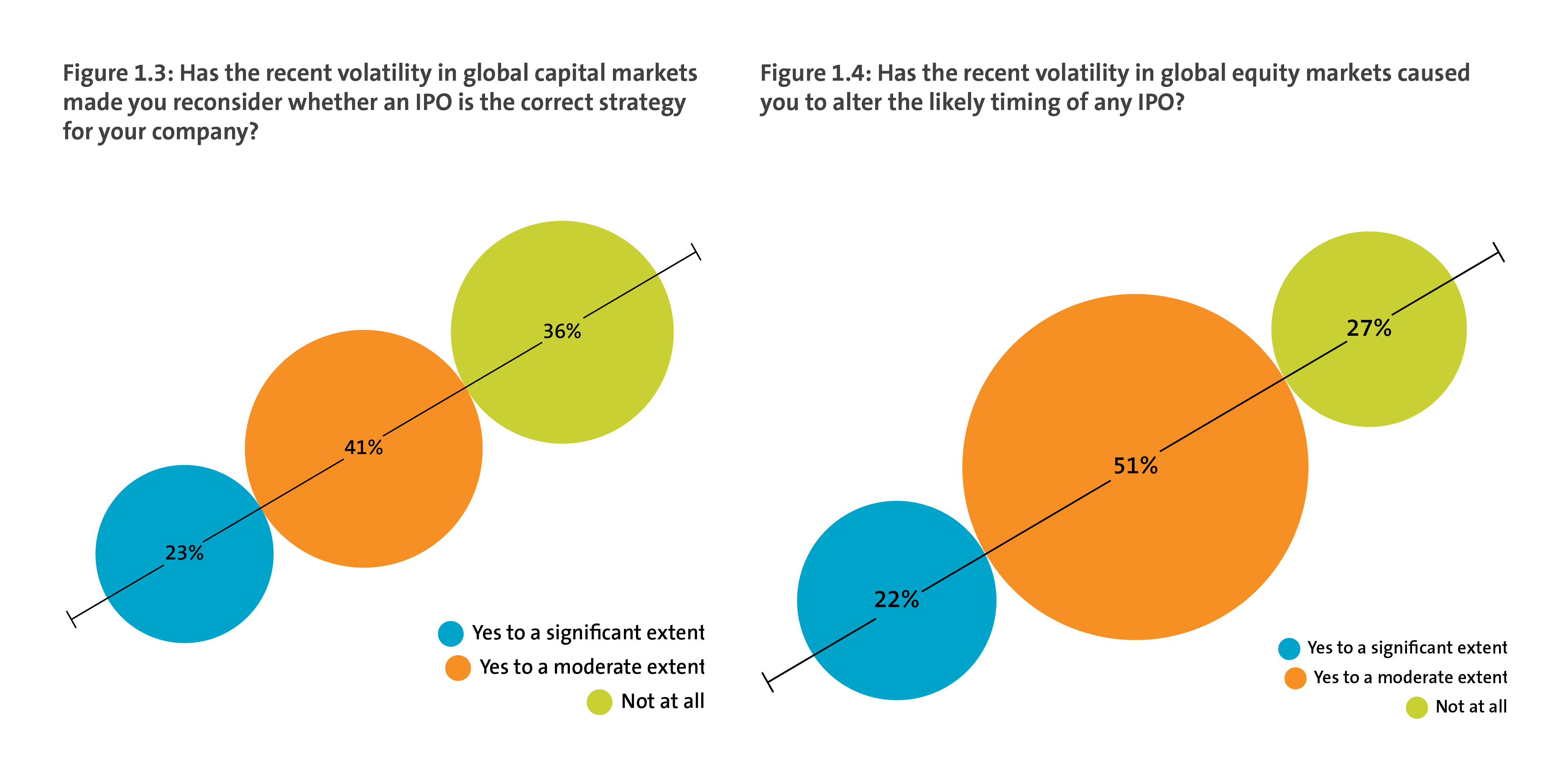 These respondents believe they are weathering the economic challenges, are well-prepared for an IPO, can achieve their desired valuation and are therefore ready to push the button. As the Senior Vice President at a US IT firm says: “We have had many rounds of funding and have been able to get good returns. For the last five years, we have been growing well and have been valued at a very high price. We are ready for an IPO and feel we need to carry it out.” When a company’s fundamentals are strong, it mitigates the risk of downward market pressure.

The timing of an IPO is often one of the key determinants of success. Companies need to be confident that there is investor appetite not only for their investment thesis but also for new issues generally.

It is unsurprising then that a substantial number of respondents (73%) said recent volatility in global equity markets has caused them to alter the timing of an IPO (see figure 1.4).

However, encouragingly, more than a quarter (27%) say that they have not changed the timing. This could be because some companies have anticipated an IPO slightly further out and prepared accordingly. However, others may believe that the advantages of being public, coupled with the belief in their business fundamentals and sector attractiveness, means that their prospects are strong enough to weather any potential storm. 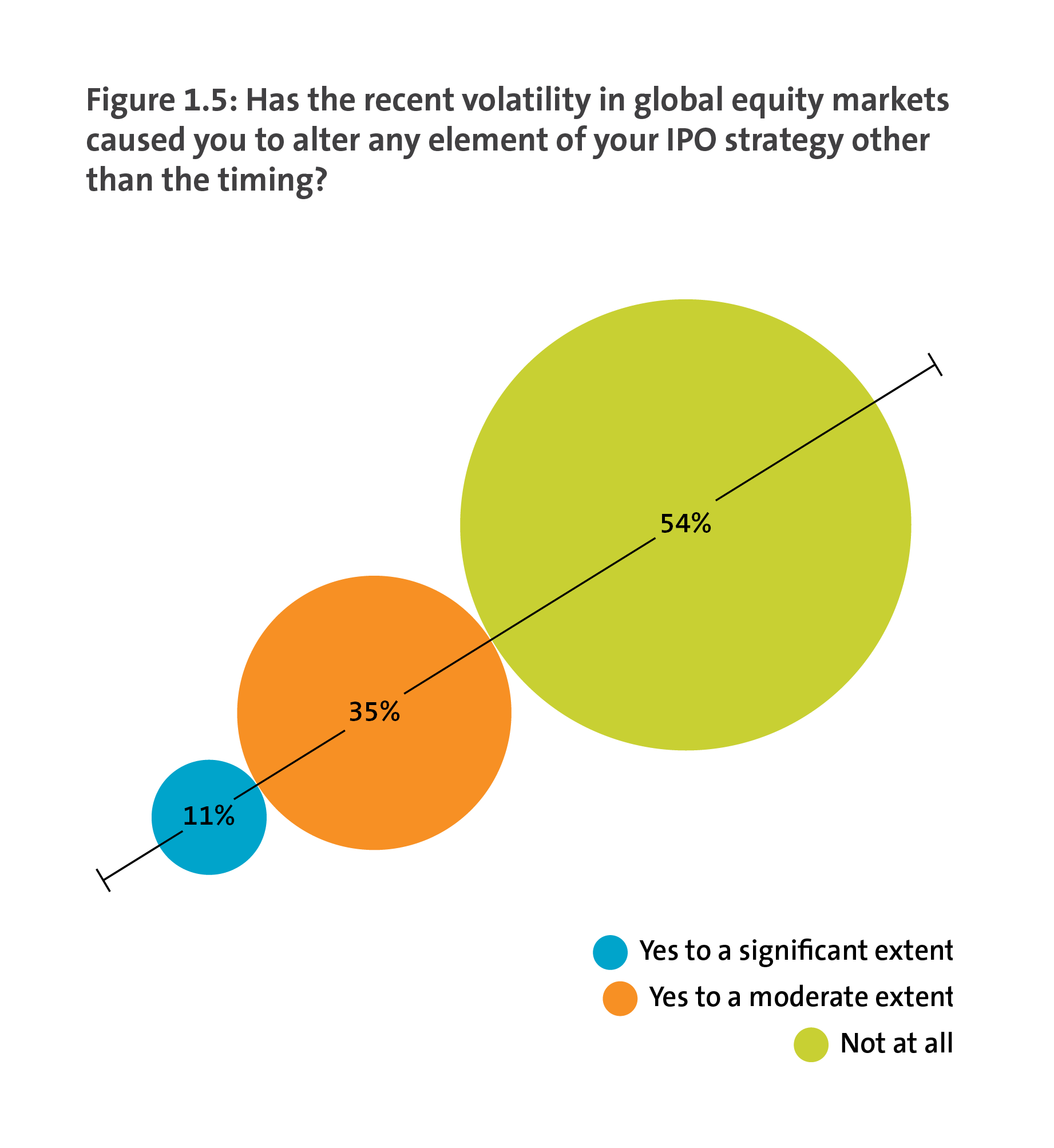 For some, market conditions have affected not just the decision of whether to proceed with or the potential timing of an IPO, but have also left some companies readjusting their expectations on valuation and offering price. Nearly half (46%) say that recent volatility in global equity markets has caused them to alter elements of their IPO strategy such as pricing to attract interest and shareholder return policies to encourage investment (see figure 1.5). The CFO of a UK retailer says: “Investors have become bearish in nature and need to be sure of returns from the investment. This kind of behaviour has forced us to reconsider our shareholder return policies.”

Others have moved to improve their results by focusing on operations and efforts to boost top-line growth and value, all to make their business more attractive to potential investors. “We are trying to improve the brand image of our company and have also restructured our debt to reduce the burden on the firm,” says the CFO of a German healthcare company.

Reed Smith on the power of preparation

Many businesses have already spent a lot of time positioning themselves for an IPO and, in the event that’s not happening, to finding alternative sources of financing or to opt for a different transformative transaction. Market volatility may give pause for thought among those who are less ready, but strategy changes are less of an issue for those that are already well prepared.

Alongside revising price expectations, changing the timing and restructuring or repositioning operations, there are a number of strategies that companies can employ to mitigate risk.

Respondents note that choice of market and efforts to optimise the capital structure are mitigating factors, in addition to taking a realistic approach to pricing. “We have opted to go for a lower IPO capitalisation range which improves our prospect for IPO success,” says the CFO of an Italian chemical company.

Some companies that have already sought funding via other capital markets, such as private placements, see the process of preparing for such issuance as helpful when it comes to an IPO. The CEO of a Korean chemical company noted: “We had a successful round of pre-IPO private placements due to our continued performance and our commitment towards our shareholders and policyholders. We are confident that an IPO will satisfy our capital needs and fuel growth.”

Bringing in additional expertise in the form of advisers, making key hires, or a combination of both, and doing so at the right time, are also strategies being employed by companies in the light of market volatility. Not only can this help with ensuring IPO readiness and providing a view on when to push the button, it can also help enhance the value of the business in the eyes of investors.

Don’t only focus on the highest valuation possible at IPO. There will be less pressure on boards if companies go public with a realistic valuation justified by the company’s performance and prospects, announce good post-IPO results, and then see an uptick in value. Far better to have a shareholder base and investment community that is loyal because the stock is trading above the IPO price than the other way around.