While the run-up to an IPO will necessarily mean focusing on preparing for the transaction, companies also need to think longer term about what being public will mean for the business

Having the motivation and preparing for an IPO, particularly in uncertain times, is half the battle. Private companies also need to plan for life as a public company. They have to weigh the pros (tapping the markets for capital to fund growth and development, plus increased liquidity in shares) and the cons (greater scrutiny, share price fluctuation, increased costs and the possibilities of shareholder pressure and even litigation). Companies need effective ways of managing the burdens of being a public company well before the IPO launch.

Pressure in the public eye

Mirroring respondents’ hesitations about the listing process itself, their biggest reservation about being a public company is greater public scrutiny and the loss of confidentiality because of reporting requirements. Fifty-nine per cent of respondents identify this among their top three most important reservations, while 23% see it as the most important (see figure 3.1). 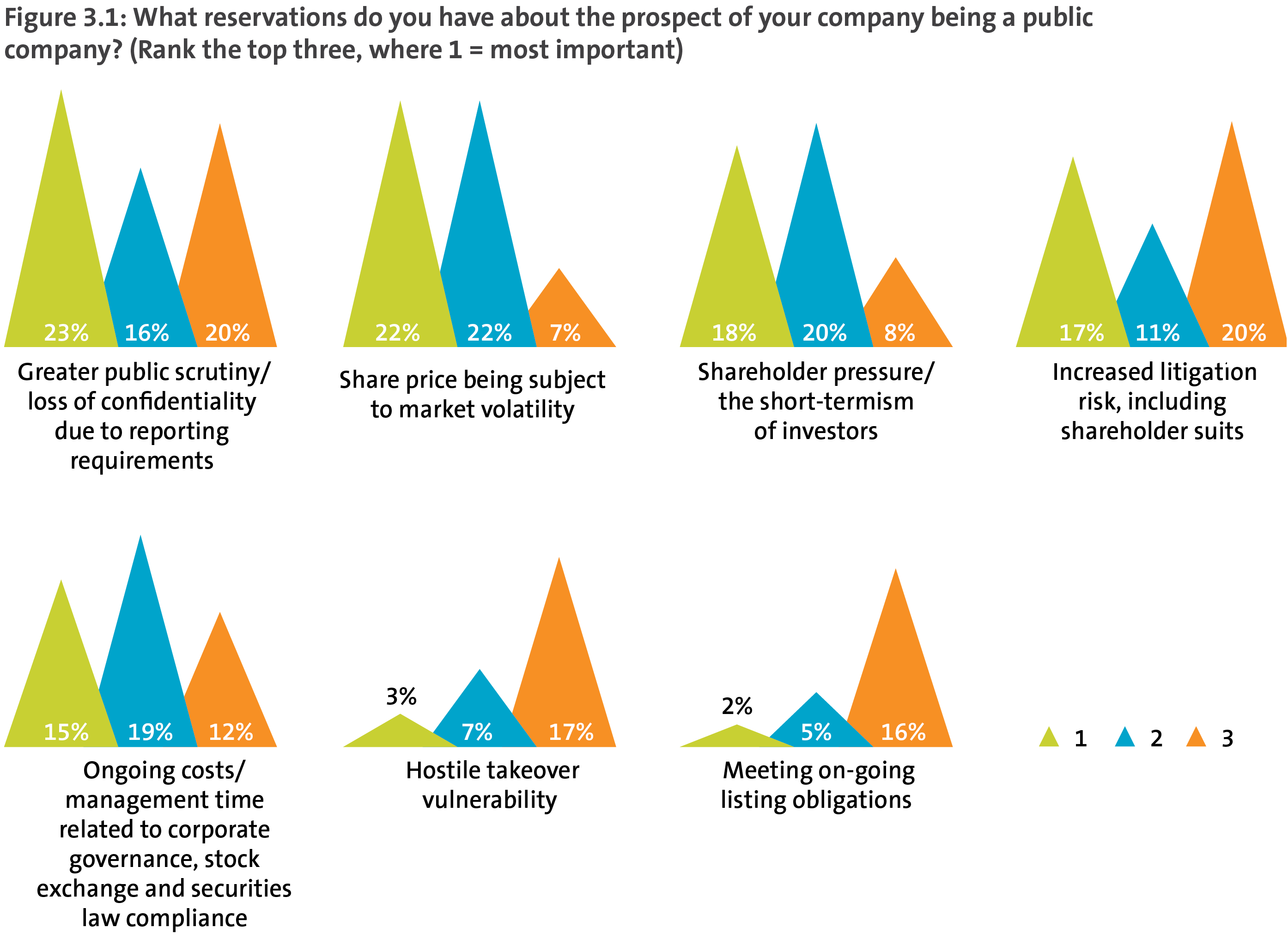 The second biggest reservation focuses on share price: just over half (51%) say concern about their stock being subject to market volatility ranks in the top three. Short-termism/shareholder pressure and the risk of litigation also feature highly in the list of reservations about being a publicly listed company.

Indeed, it is surprising that this was not more of a concern, considering how investor activism has grown over the past few years. For example, in 2015, the number of companies subjected to activism reached 551, up 16% from 2014, according to The Activist Investing Annual Review 2016. “Shareholder pressure may cause companies to shift focus from core operations, affecting flexibility and obstructing core decision-making,” says the CFO of a US-based drug firm. “The short-termism of investors is something that we are highly concerned about.”

On a sector basis, there are some interesting variations in the results (see figure 3.2). For example, consumer and retail businesses are more concerned about the greater public scrutiny that comes with listing, with 36% citing this as the top concern, compared with 23% overall. TMT companies have most reservations about shareholder pressure and short-termism (compared to 18% overall). 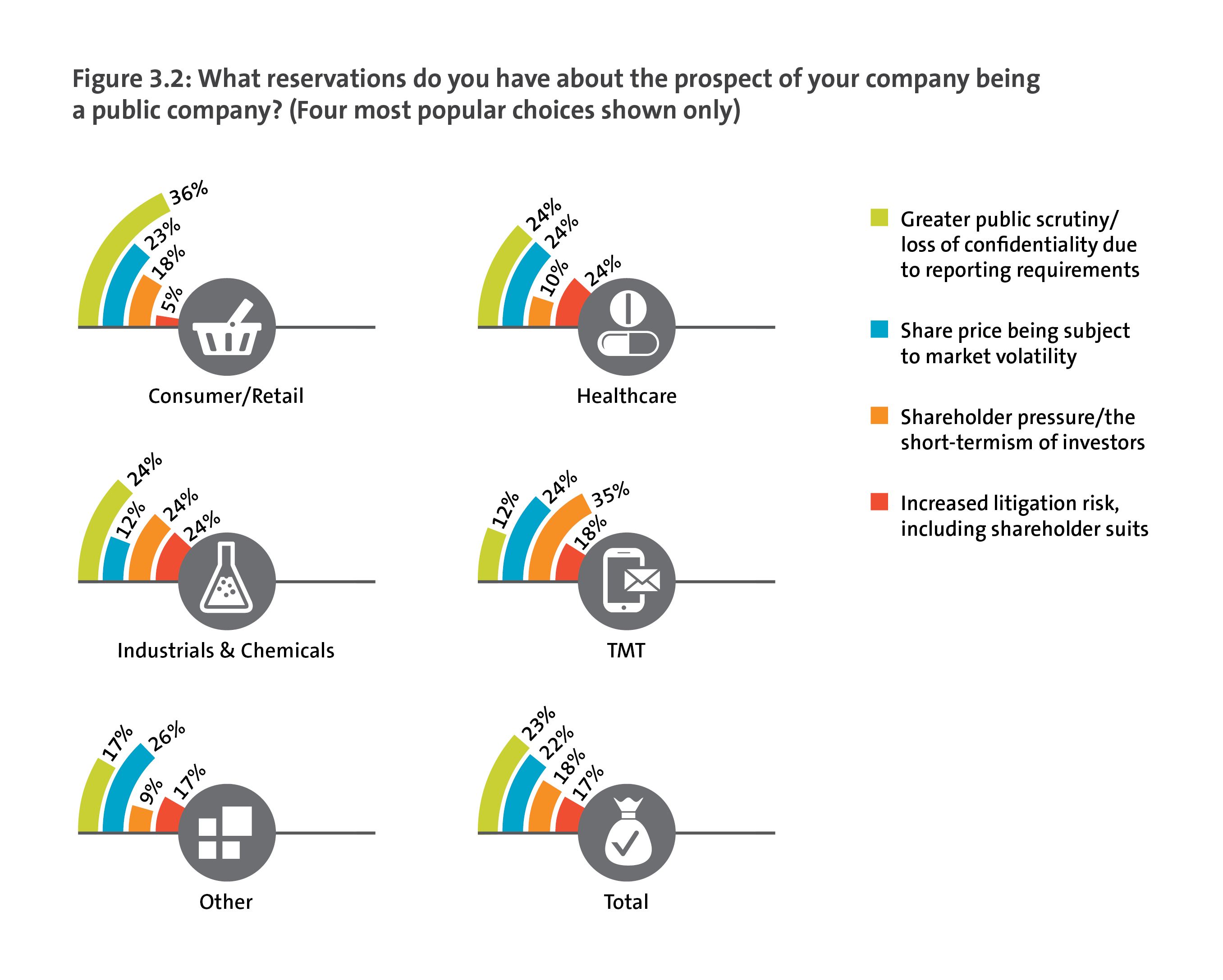 It seems likely that the principal concerns among retail and consumer businesses are a reflection of the disclosures that need to be made as a public company – and for this sector margins, concentration of revenue, dependency on vendors and material agreements are viewed as commercially sensitive.

For TMT companies, the reservations possibly stem from the spate of shareholder activism in some markets, most notably the US, that has been focused to a degree on technology businesses. A 2016 Boston Consulting Group report found that the average S&P 1500 company has a 13% chance of becoming an activist target, while the proportion for technology companies is higher, at 22%.

Overall, these responses are all linked to concerns around a perceived loss of control about aspects of business management. Yet a well-run and advised firm should be able to avoid being subject to most, if not all, of these pressures.

Nevertheless, when asked whether they have a strategy in place to mitigate the effects of their top reservation of being a public company, almost half (45%) say they do not (see figure 3.3). 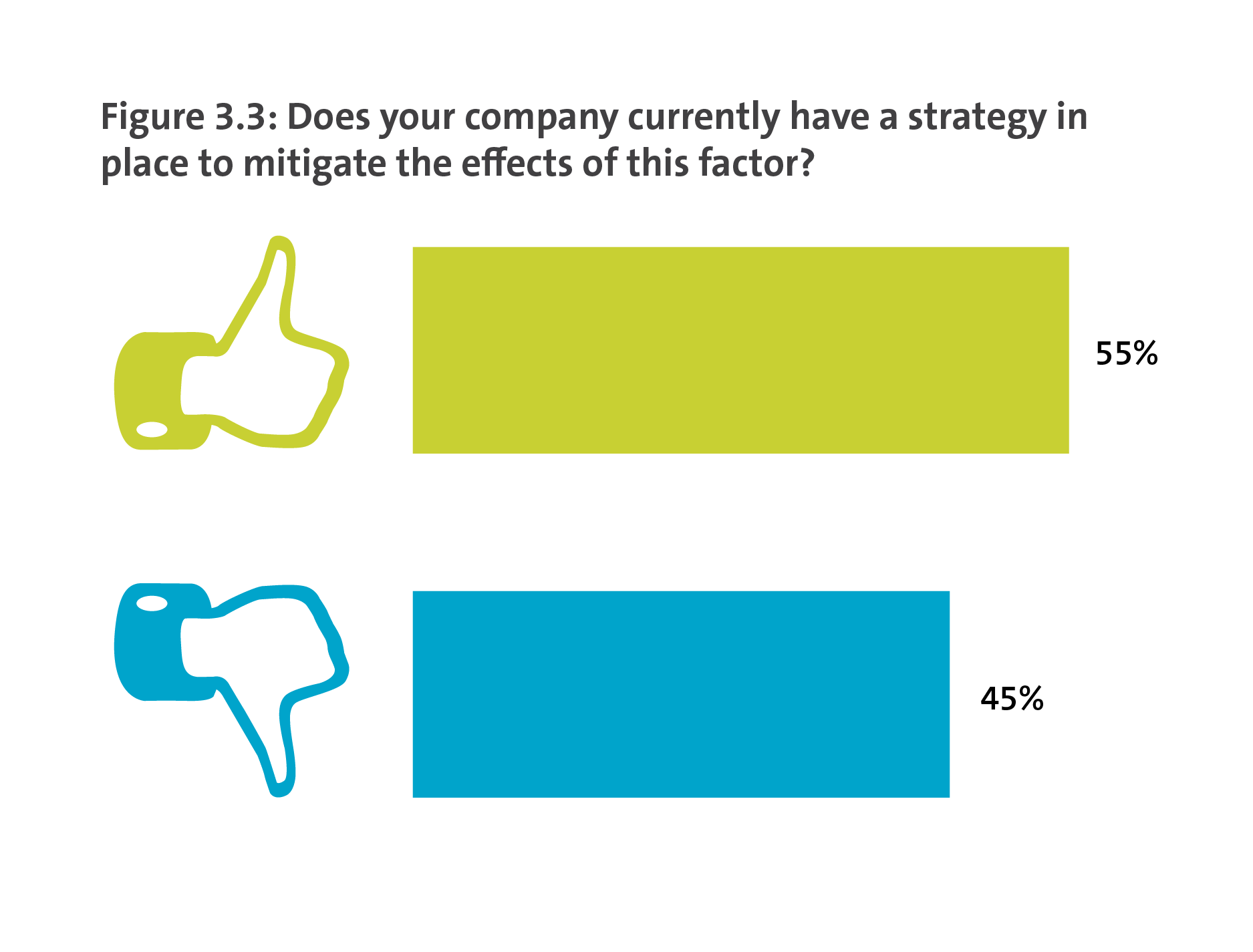 Among those most concerned about shareholder litigation, the CEO of an Asia-Pacific chemicals company says: “We have proper frameworks and measures to mitigate the risk of litigation. We follow all the relevant laws and regulations that are imposed on a public company. We also have strict safety and security standards which we adhere to and that reduce our chances of facing litigations and lawsuits.”

For those who mentioned management time and costs, respondents with a strategy have identified any areas of potential weakness and worked to address these; or have identified a panel of experts to define and implement codes of conduct and policies.

The CFO of a US healthcare firm, with concerns about the risk of hostile takeovers, says the company has a well-rehearsed plan. “To avoid hostile takeovers, we have articulated various strategies,” he says. “We can exercise a shareholder rights plan or voting rights to avoid any prevailing vulnerabilities. We can also consider increasing shareholder and board benefits to mitigate these risks.”

Most companies are looking to use the proceeds of an IPO to invest in capital expenditures. The vast majority (83%) say they plan to use over 30% of capital raised for this purpose, including 56% who are planning to deploy 31-45% of the proceeds on this and 1% looking to allocate as much as 61-70%.

Research and development is another area for investment, with 8% suggesting they will spend 31% or more of the proceeds on this and 40% who will allocate between 16% and 30%. Sales and marketing are set to receive up to 15% of the proceeds in the majority of cases (87%) and a similar percentage (85%) have the same proportion earmarked for corporate acquisitions.

All the above areas suggest companies are seeking an IPO to fund growth and development of the company. However, companies are also looking to public markets to finance other activities. General corporate purposes ranked relatively highly, with 58% saying they would spend 16% or more on this and 51% that they would allocate over 16% to paying down debt.