Despite the increasing interconnectedness of the global IPO markets, there are some subtle differences in each region

This pattern reflects the appetite for large technology offerings in the first half of 2015, such as the Auto Trader Group, which raised nearly US$2.4bn on the London Stock Exchange.

However, this was followed by the subsequent drop in popularity of tech IPOs in Europe as investors sought to digest and temper their exposure to the sector. In 2015, 7% of European IPOs raised US$1bn+; in 2016, only a handful of IPOs have raised US$1bn or more, including Danish wind farm company Dong, which raised US$2.5bn in a June 2016 listing. Uncertainty around the precise effect of Brexit on the wider European economy suggests that few companies are likely to opt for IPO in the near term.

In Asia, IPO volume fell by 34% from 297 in H1 2015 to 195 in H1 2016, reflecting concerns around the slowing of the Chinese economy and outflows of capital away from emerging markets. Yet Asia remained the most active of all three regions in 2016, with the Chinese, Hong Kong and Japanese exchanges seeing the highest volumes. Japan’s Line Corp produced the largest global technology IPO so far in 2016 when it listed in July, raising US$1.1bn.

North America saw the biggest fall in volume of all regions, declining 60% in volume from 106 IPOs to just 42 in the second half of 2016, compared to 163 IPOs in the first half of 2014. Potential rate rises, the poor performance of past IPOs and general economic conditions are all factors weighing on the minds of investors in US public markets. Yet some big IPOs were still able to get off the ground, such as US Foods’ US$1bn offering on the NYSE in May. 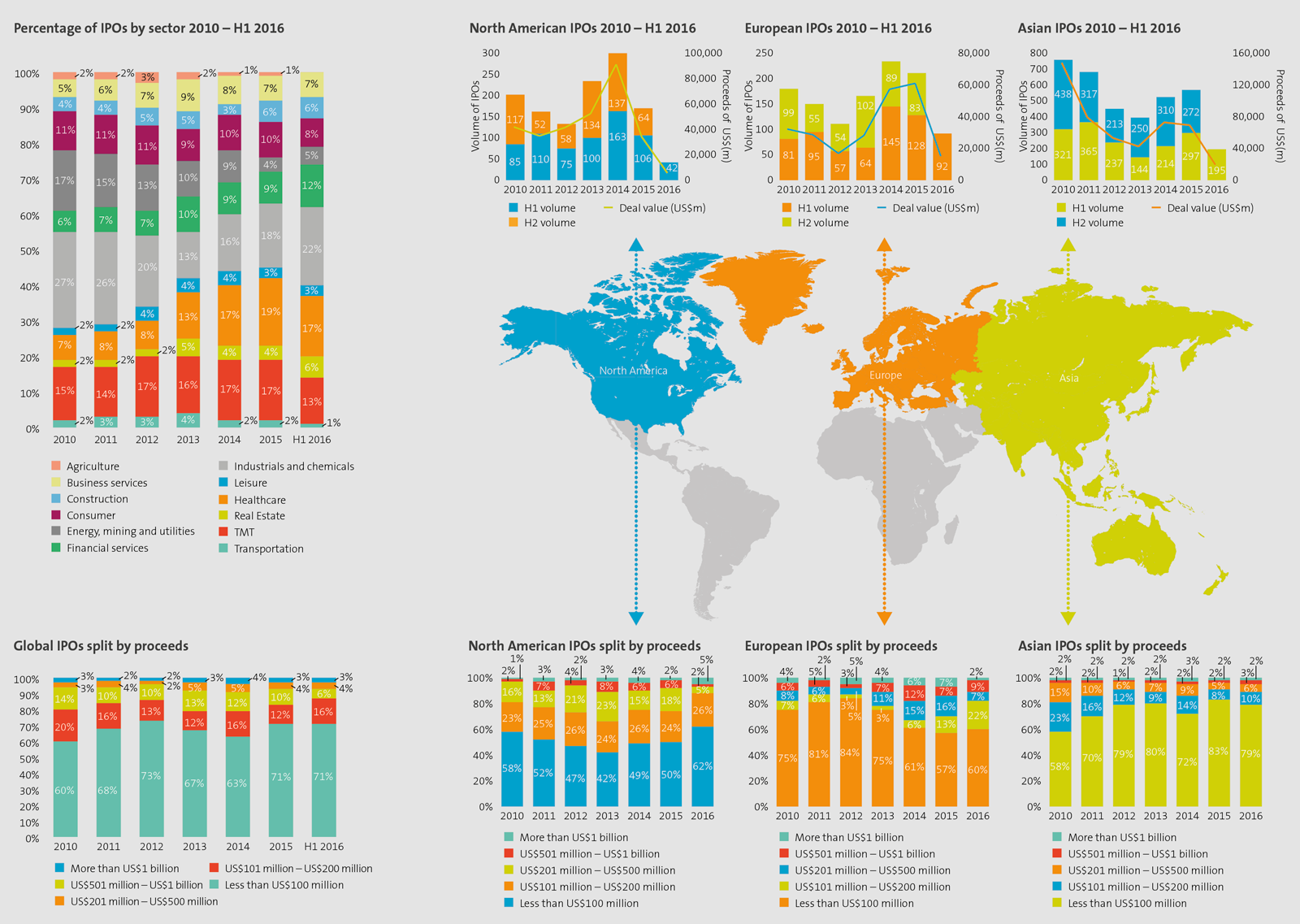 Recent listings in these sectors include UK-based Clydesdale Bank, which floated on the London Stock Exchange in early 2016, and Intellia Therapeutics, which went public on the Nasdaq in May this year.

Both industries are undergoing a high degree of change – in financial services, disruptive technologies, combined with additional regulation, are leading many companies to seek new capital, while in healthcare, the need for scale and innovation is driving M&A activity more generally.