Because of market volatility, corporates need to be prepared to move swiftly when markets are receptive to a new issue

When it comes to IPOs, motivation and preparation must go hand in hand. Ensuring your rationale for going public is sound and fits in with your overall business strategy is also key.

Our survey reveals that firms are not just focusing on short-term cash boosts, but are positioning their companies for future growth. Indeed, while the most important motivation for respondents in seeking an IPO was to raise cash – 35% said it was the top consideration, with 64% mentioning it in the top three – respondents noted that there are many more advantages to going public beyond simply raising capital (see figure 2.1). Raising the company’s profile is also a key motivation, with 50% ranking this as a top-three driver, including 15% who believe it was the most important factor. Not far behind is gaining a better valuation as a public company, seen by 47% as a one of the three most important drivers, with 15% ranking it the top. 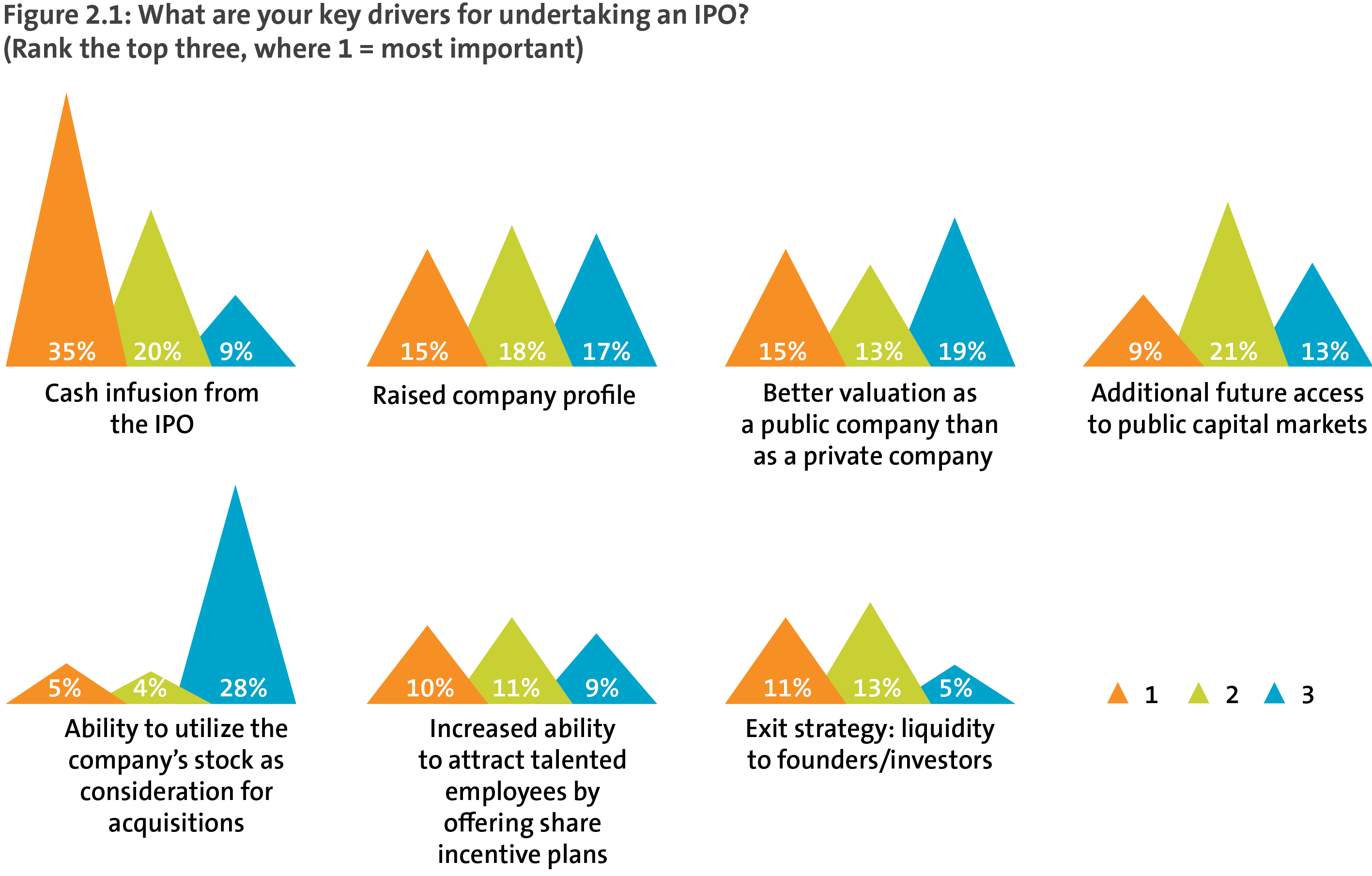 The other key considerations mentioned by respondents suggest companies have their sights firmly set on their future strategic goals, such as having access to public markets for future capital raising (43%), the ability to use the company’s stock for acquisitions (37%) and an increased ability to attract employees (30%).

Interestingly, there are some variations in key drivers when we explored the relative size of the company’s IPO. For example, 50% of companies planning an IPO of less than US$100m are motivated most by an increased ability to attract personnel through share incentive plans, compared with just 10% of overall respondents (see figure 2.2). This suggests that smaller companies are relying more on equity to incentivise and attract employees who will see the prospect of an IPO as a compelling reason to join an emerging company.

Another divergence is the 25% of respondents with IPOs expected to raise US$501m to US$1bn that say their top driver is to provide an exit strategy: liquidity to investors. This compares with 11% of respondents overall and just 7% of respondents in the US$201m to US$500m bracket.

Overall, the responses to our survey suggest that companies are taking the necessary steps to prepare for an IPO. However, companies are still at diverse stages of preparedness.

Among the list of preparations essential for an IPO, the assessment of whether the company meets their desired stock market’s eligibility criteria has been completed by the vast majority, with 92% of respondents saying this (see figure 2.3). 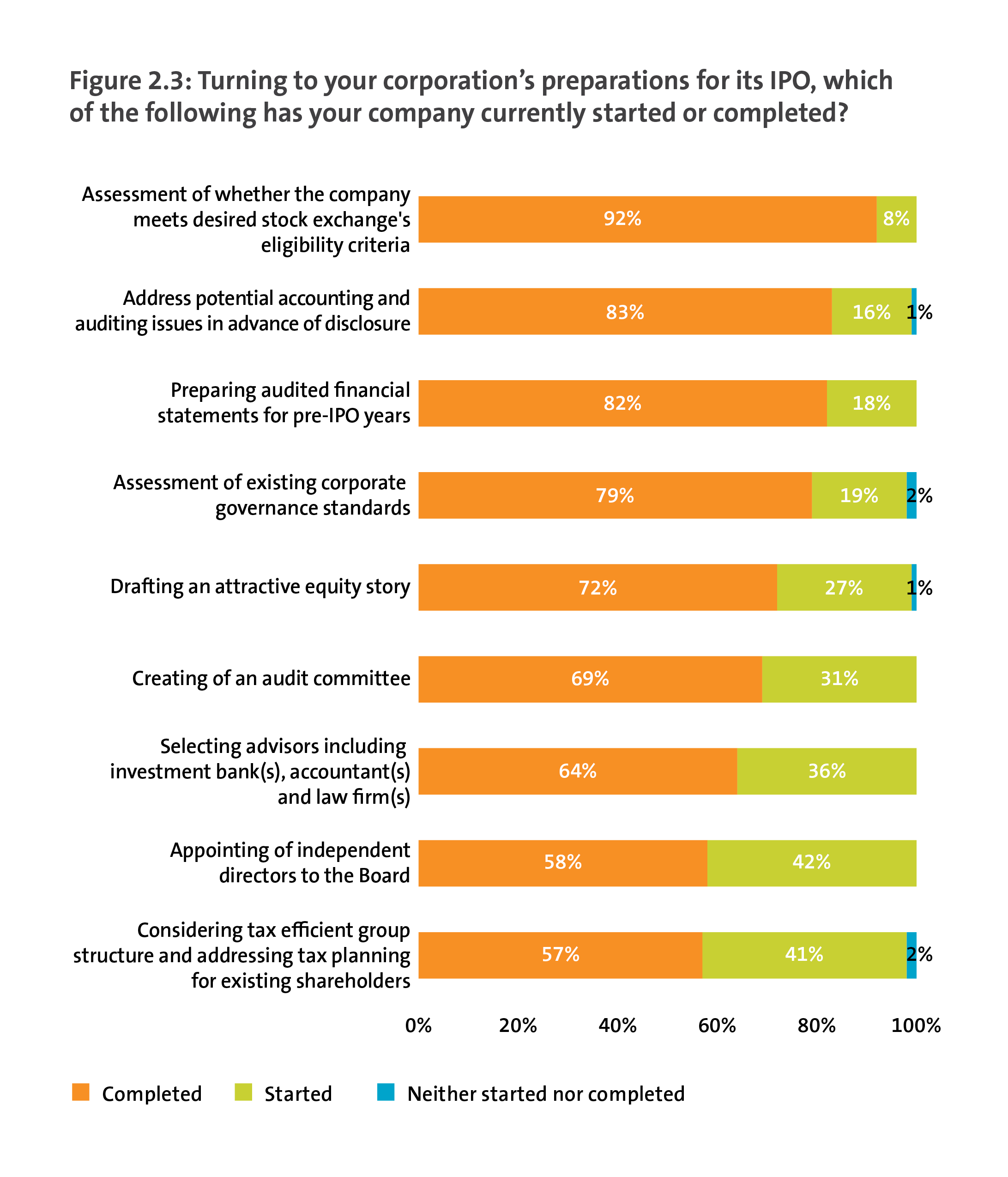 The signs that companies are well on their way to addressing potential accounting and auditing issues ahead of disclosure (completed by 83%) and obtaining audited financial results for pre-IPO years (completed by 82%) are also positive.

Nevertheless, many companies appear to be less well prepared when it comes to some other areas. For example, considering tax-efficient structures and addressing tax planning for existing shareholders has been completed by the fewest respondents (57%). Meanwhile, 41% have started considering this and 2% have neither started nor completed it.

While the majority of respondents (64%) have selected a team of advisors, over a third (36%) have not. Investment bankers, accountants, law firms and investor-relations firms are all critical to the success of an IPO, given their experience in guiding a company through the complexities of the listing process. Building relationships well before the listing with the right advisors can ensure a smoother and more cost- effective path to IPO.

For details on how the US has made it easier for emerging growth companies to lay the groundwork for an IPO, see Listing in the US.

It’s really important to determine, from an early stage, which exchange best suits your requirements. This will determine the conditions that you’ll need to satisfy at the point of listing and the post listing obligations, in terms of financial reporting requirements, governance commitments and standards, and issues relating to the constitution of the company (and equity available).

Private companies that put corporate governance practices in place and approach the governance standards of public company listing requirements not only benefit from those practices while they are still private, but will need to spend less time focusing on them during the listing process and may have a smoother transition to public company life.

Public scrutiny and the risk of negative publicity should not prevent a company from seeking a listing, because the benefits of being a public company often outweigh these risks. The risks are also very manageable. Strong disclosure controls and procedures, a top-down culture of compliance, careful consideration of significant disclosure issues facing the company and clear, complete and timely disclosures of those issues are the best ways to protect against challenges from investors who say they did not have information that they would consider important in making an investment decision.

While respondents clearly see major benefits in becoming a public company, their main hesitations focus on how the offering and the company will be received by the market.

Chief among these was the increase in public scrutiny, ranked in the top three by over half (53%) of respondents, including 28% who say it is their main concern (see figure 2.4). Public disclosure of details around business operations and financial results also cause some uneasiness. Nearly half (47%) cite this in their top three concerns. 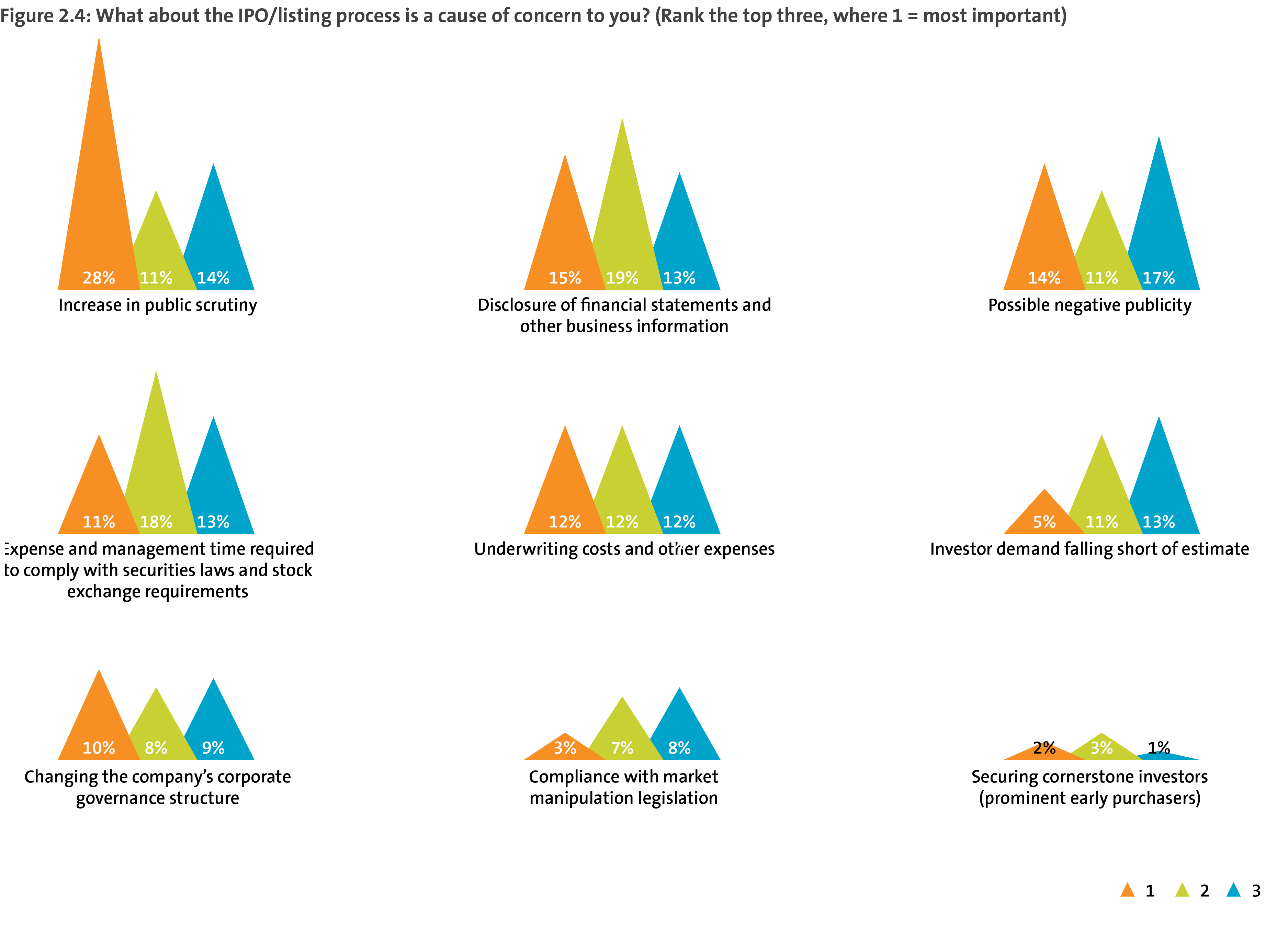 With a public profile comes the risk of possible negative publicity – a top-three concern for 42% of companies. For many firms, preparing public reports on a timely basis is a new undertaking that requires a significant investment of management resources, and the pressures of meeting earnings estimates is considerable.

If you’re considering an IPO, you really need to think about all the agreements you enter into and how they would be perceived in the public markets – that’s everything from debt packages and management services agreements, to contracts with customers and suppliers. When executing agreements, think ahead to identify confidential information that may need to be redacted when it comes to public disclosure without the need for lengthy discussions with the counterparty.

Deciding which stock exchange to choose for your listing will depend on a number of factors. At the outset, consider whether your company meets the initial listing criteria of the exchange as well as the continued listing standards. Whether the company can achieve a higher valuation on one exchange versus another is, of course, the most important consideration. Pursuing a domestic or international listing or dual listing are also key considerations, again dependent on your business and where you see the most robust investor base.

The risks identified above are manageable, as long as companies seek to employ the appropriate strategies to mitigate them. The majority (68%) of respondents say they currently have such a strategy in place to help them manage their top concern (see figure 2.5). Tellingly, however, nearly a third (32%) say they do not.

Drilling down further, among those who were most concerned about public scrutiny, strategies included being as transparent as possible, ensuring that a high-quality investor relations team is in place and using advisors.

For those worried about negative publicity, it is a case of making sure the company’s public image is well maintained and managed by having a leadership team who have credibility in the market, as well as the right people who are experienced with dealing with the media.

The decision about where to list determines the scope and nature of compliance obligations for the offering process and as a public company – and should be one of the first considerations for any company. Among the respondents, the vast majority (94%) say they are most likely to choose a stock exchange in the same country as their company’s headquarters as their primary listing (see figure 2.6). 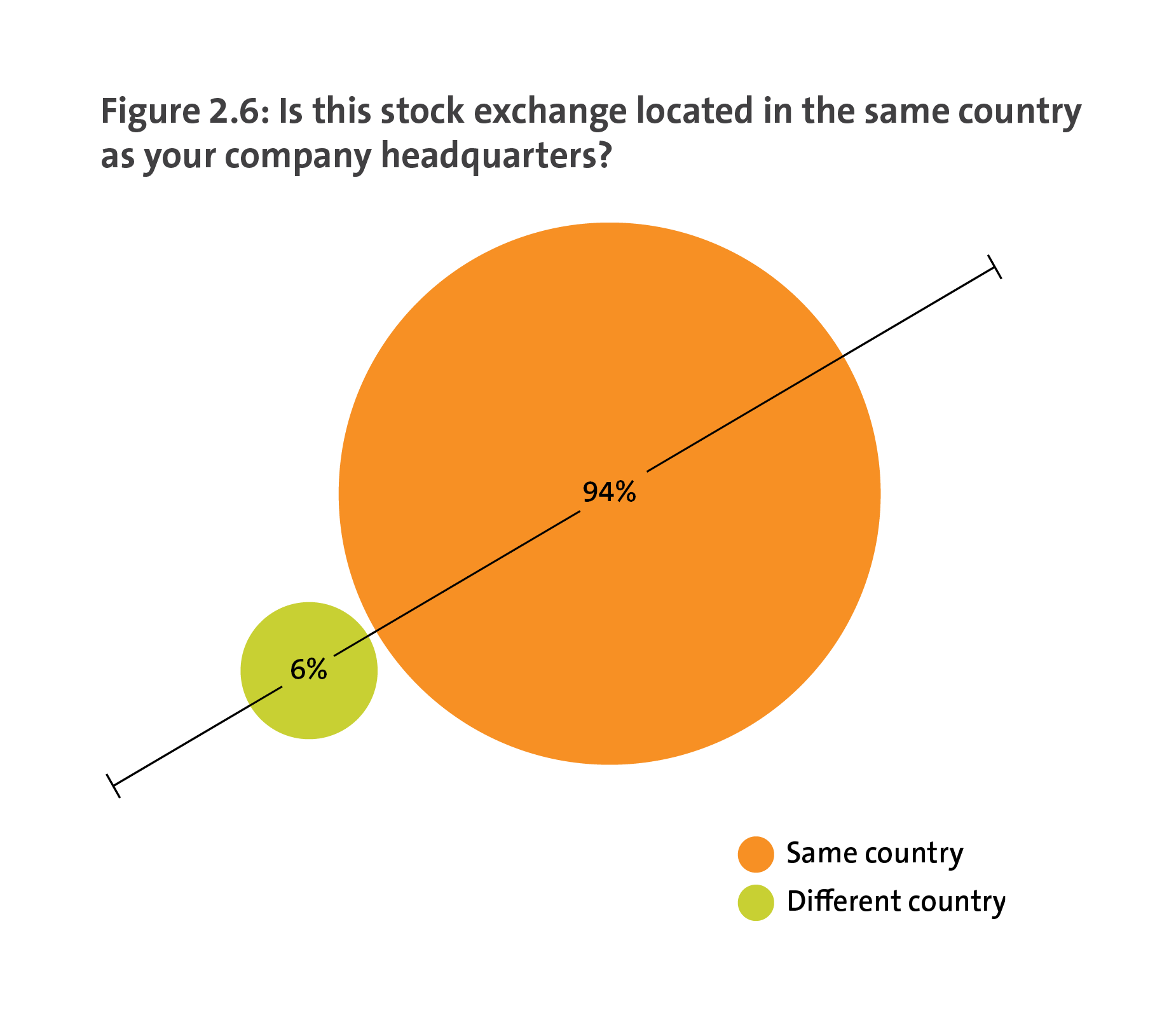 When asked further about the reasons for considering a particular stock exchange, over half (58%) say the fact that it is located in the company’s major market for its goods and services is a top-three factor, including a third that think this is the most important reason (see figure 2.7).

The desire among many respondents to increase the company’s profile in the region of the stock exchange was another determining factor. This is a top-three reason for 44% of respondents, with 15% saying this is the primary rationale.

Also important to respondents is access to deeper pools of capital, which ranked joint third overall in importance with prestige or credibility of the listing on their stock market of choice (both cited by 43% of respondents). 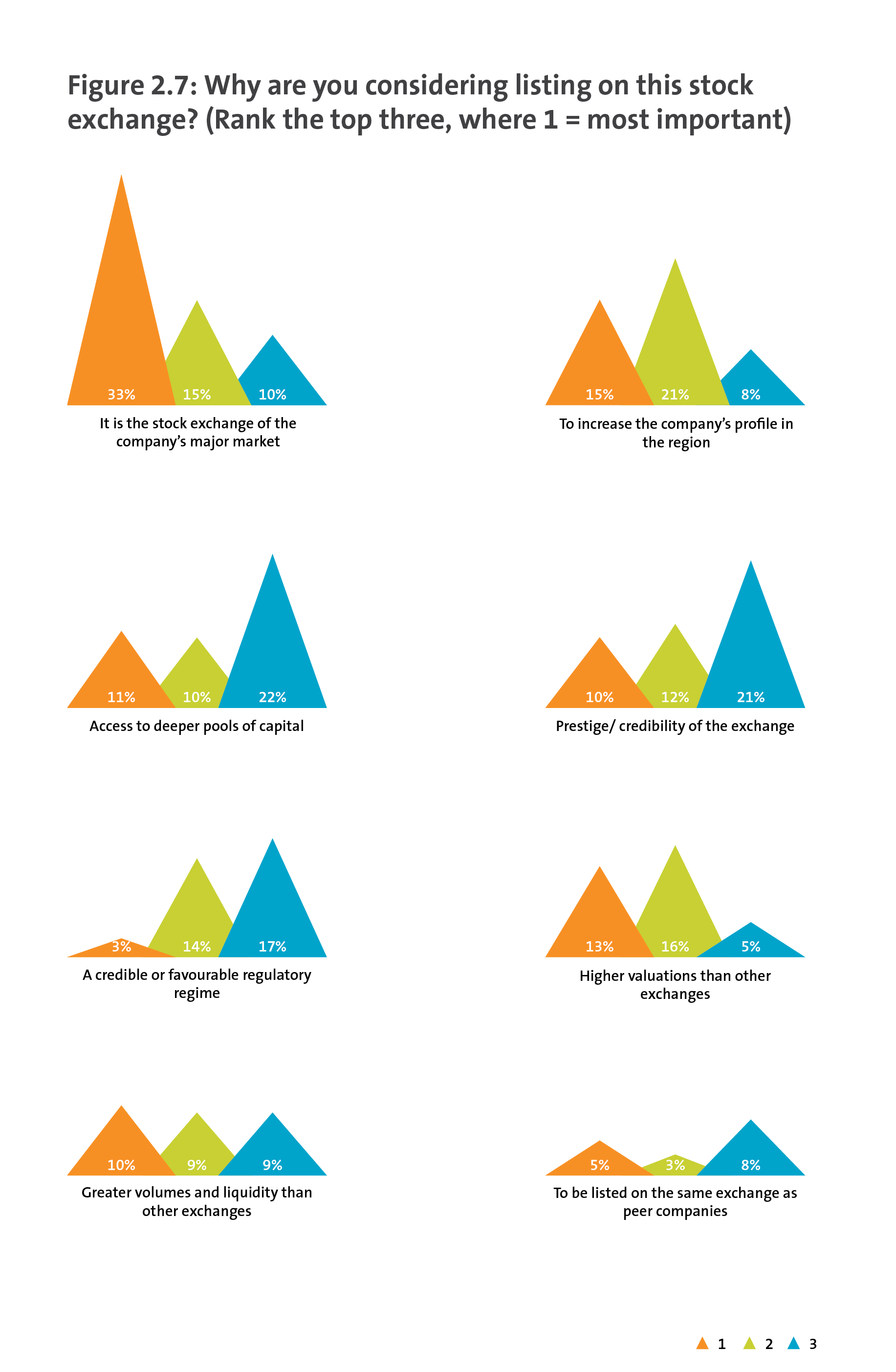