Listing in the US, Asia and UK

Listing in the US

How has the JOBS Act affected IPOs in the US?

We spoke to respondents planning to list in the US to garner their views on the extent to which regulatory changes under the Jumpstart Our Business Act of 2012 (the so-called JOBS Act) has affected their views on the markets and their process for listing.

Under the JOBS Act, companies that meet the definition of emerging growth companies can submit a registration statement for an IPO on a confidential basis to the SEC, a change that was intended to encourage more IPOs in the US markets by allowing these companies to get through the SEC review process without disclosing publicly their plans to list.

Among our respondents, 38% say they have already submitted registration statements with the SEC on a confidential basis, with a further 49% saying they plan to do so (see figure 3.4). This suggests a high degree of support for this measure, as does the response to the question of whether the confidential nature of the submission mitigates some of the risk associated with the IPO process, as over two thirds (67%) say it has. 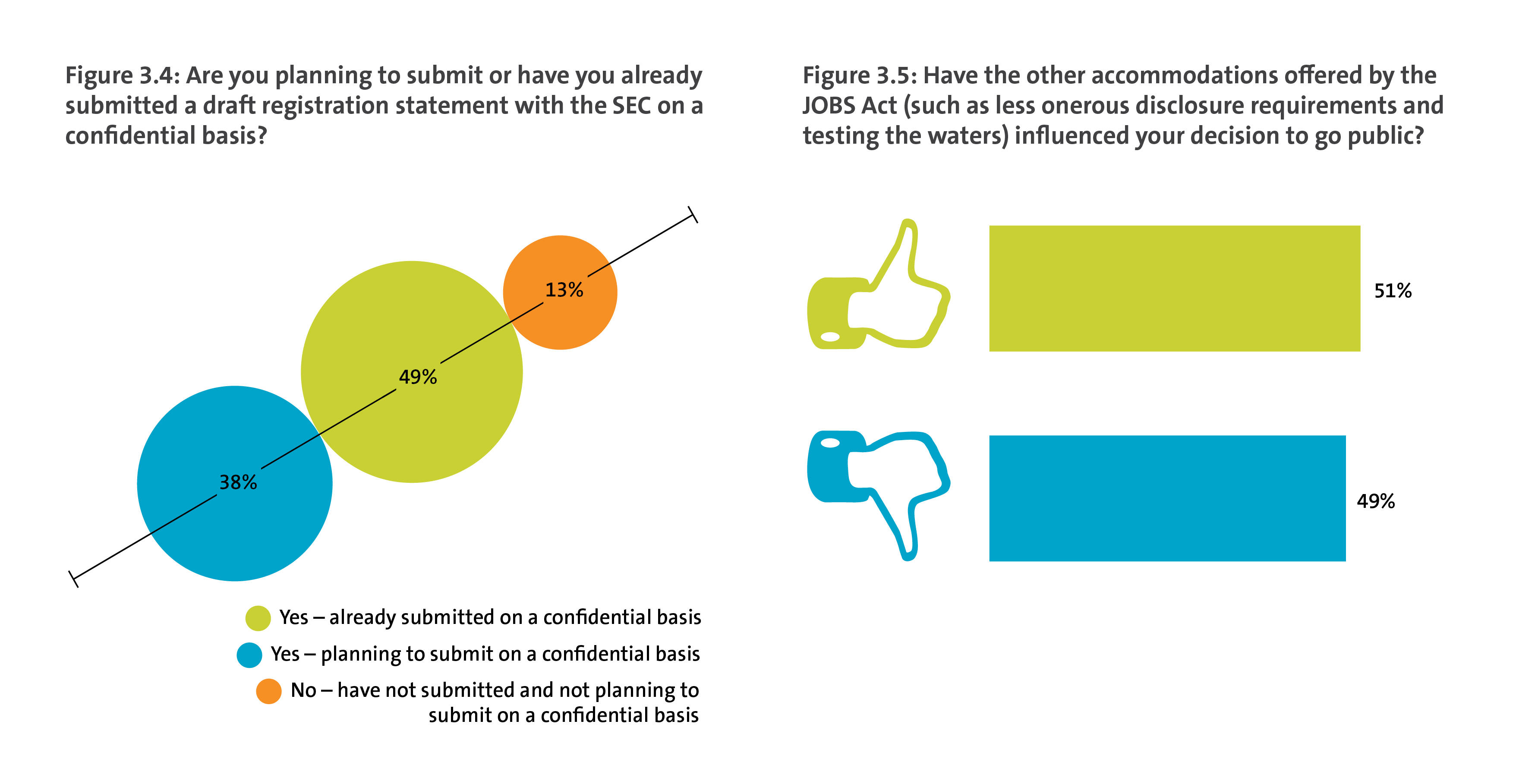 The response to whether the accommodations offered by the JOBS Act had influenced respondents’ decisions about whether to go public also suggests a fairly high level of support for the measures, as just over half (51%) believe this to be true (see figure 3.5).

Respondents point to the confidential nature of initial company filings as a particular attraction. “The JOBS Act has somewhat motivated us to go public since it offers the benefit of filing company papers with the federal regulatory bodies without full disclosure,” says the CFO of a US technology company. “The JOBS Act also doesn’t force companies to disclose documents until just before the IPO launch which can give companies enough time to gauge their market strengths and weaknesses.”

Among the 49% who say it hasn’t influenced their decision of whether to go public, most believe the decision had been driven mainly by strategy and the aims of the business rather than any regulatory changes.

How has volatility in the Chinese equity markets affected IPOs?

The last year or so has seen a high degree of volatility in Chinese equity markets as the economy’s growth trajectory moderates and the fear of an asset bubble periodically haunts investors. Last summer saw major falls in the markets as the Shanghai Stock Exchange experienced a drop of over a third in the space of a month, ushering in a period of turbulence that continues into today’s markets.

The majority (70%) of respondents looking to list in Asia say that recent turmoil has influenced their decision, including 20% who say it has done so to a significant extent (see figure 3.6). The CFO of an Indian leisure company says that it has made them reassess their IPO: “We were due to carry this out last year, but once the Chinese market slumped, our market took a turn for the worse. This has directly affected our ability to get capital and has made us a bit sceptical.”

Among the 30% who said it hasn’t affected their strategy, most are seeking to list in other Asian markets, where volatility is more moderate. “The Chinese equity markets have not influenced us,” says the Group Finance Director of an Australian leisure company. “We know our domestic markets well and this has helped us to plan the strategies for the IPO so we would incur minimal losses, if any occur.” 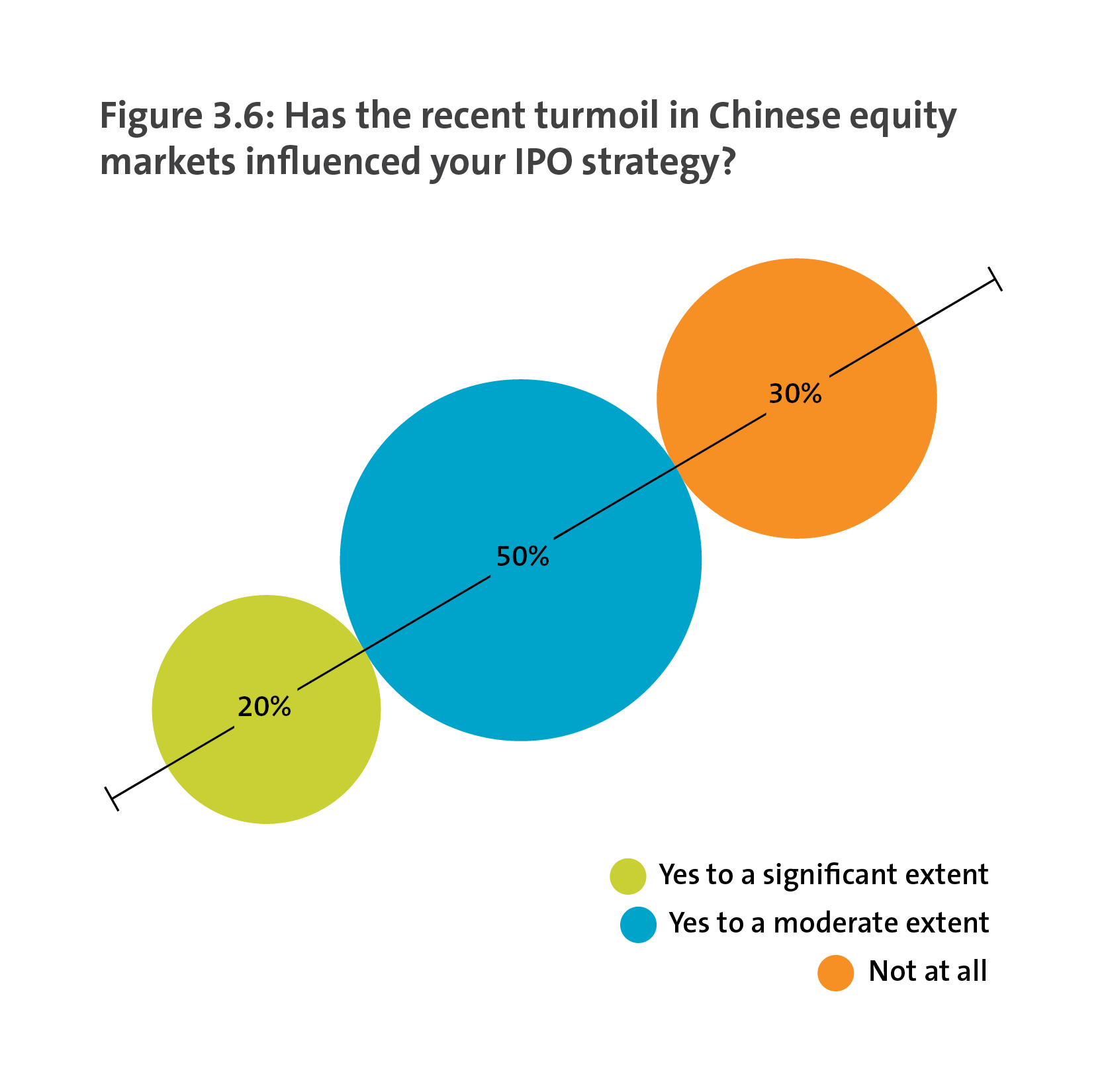 Listing in the UK

How do respondents feel about proposed changes to the UK IPO process?

After a year-long study, the UK’s Financial Conduct Authority (FCA) is now looking to reform the IPO process in a set of proposals to reduce the opportunity for banks to cross-sell services in addition to their advisory mandates for companies seeking access to the capital markets.

With the aim of improving the information available to investors in IPOs, the FCA is considering a change to rules that could promote research on issuer companies being undertaken by analysis not connected to underwriters.

All respondents seeking an IPO in the UK say they would welcome such a move. Changes to encourage earlier publication of interim prospectuses are also seen as beneficial, with 83% saying they are in favour (see figure 3.7).

Finally, three-quarters of respondents say they would be in favour of changes that would enable independent research analysts’ access to issuers’ management during the process.

There is also a high degree of support for moves that will increase and improve the independence of analysts’ coverage of companies. “Increased analysis coverage is good for getting investors interested in the company,” says the Head of Corporate Development for a UK healthcare company. 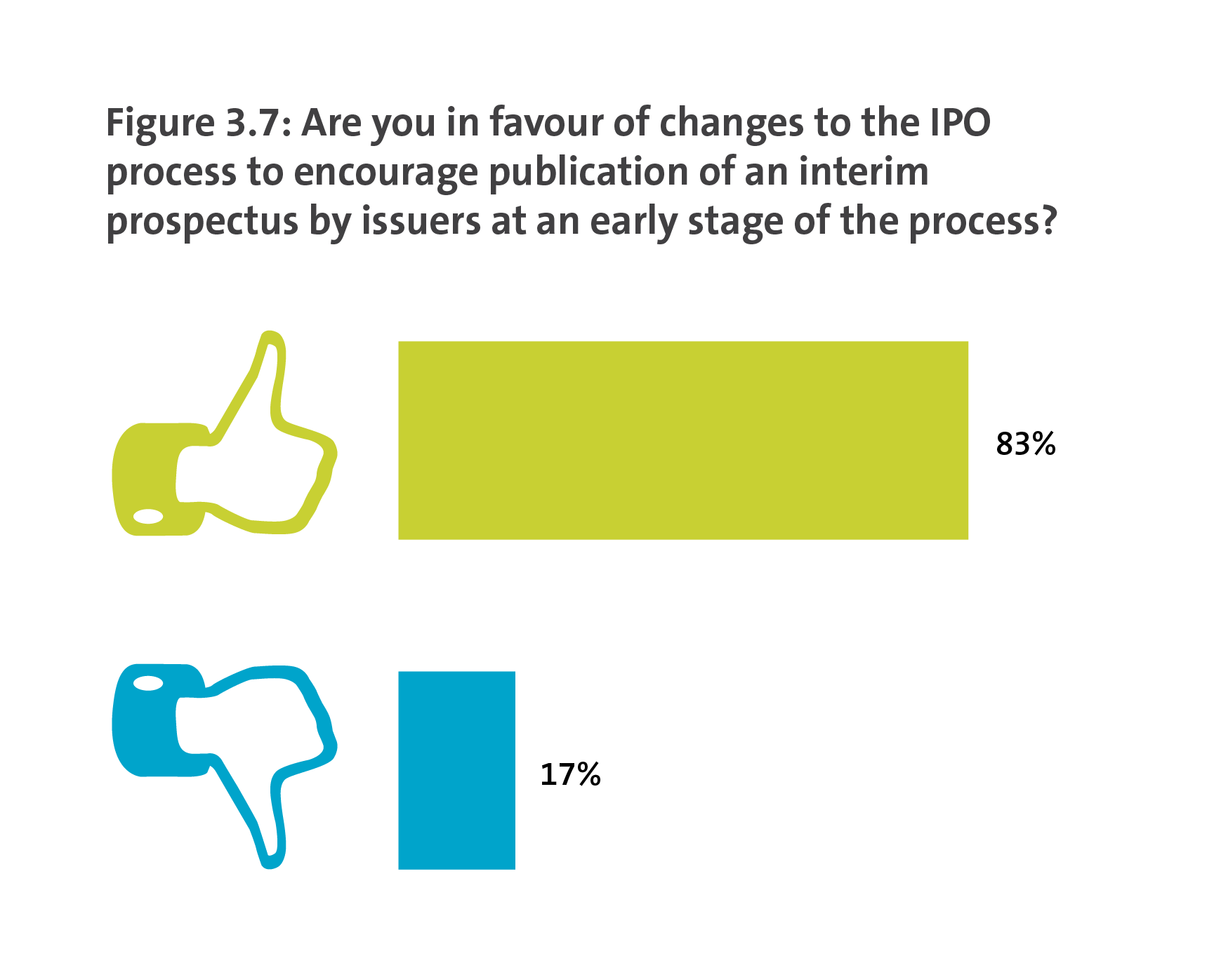 Finally, three-quarters of respondents say they would be in favour of changes that would enable independent research analysts’ access to issuers’ management during the process.

Among those supporting the proposals, there is a high degree of support for moves that will increase and improve the independence of analysts’ coverage of companies. “Increased analysis coverage is good for getting investors interested in the company,” says the Head of Corporate Development for a UK healthcare company. “Good research is difficult to find.”